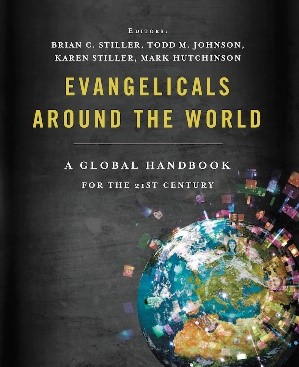 Thomas Nelson announced today that the title Evangelicals Around the World: A Global Handbook for the 21st Century received the Gold Award for Education Resources in the third annual Illumination Book Awards. Together with his team of multi-disciplined scholars, writers, and leaders, general editor Dr. Brian C. Stiller provides a comprehensive history of evangelical Christianity that crosses cultures and histories and offers a thorough assessment of evangelical theology and doctrine. Stiller and his editorial team, Todd Johnson, Mark Hutchinson, and Karen Stiller, highlight essays, articles, maps, graphs, photos, and more to tell a cohesive story about one of Christianity’s largest global movements.

Dr. Robin Harris, Director of the Center for Excellence in World Arts at GIAL, contributed the chapter “Evangelical Engagement with Ethnodoxology: Toward a Vision of Worship from Every People and Tongue.” She comments, “I was thrilled to receive an invitation to write about the growing global movement of ethnodoxology and how it is changing the way people think about worship and culture. I hope that this award will spread the news further about this well-crafted and strategic volume.” Read more at worldea.org